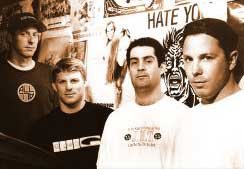 98 Mute was a hardcore punk band from Hermosa Beach, California. They were formed in 1993, and signed to Theologian Records in 1995. Their first, self-titled album was released in 1996, and the band was featured on several skate videos and compilations of Californian punk. In 1997, the group toured with Blink-182 and Pennywise. A second album on Theologian followed in 1998 before the group was picked up by Epitaph Records. They released two albums on Epitaph before breaking up in September 2002, shortly after the release of their fourth full-length, After the Fall.Drummer Justin Thirsk is brother to Jason Thirsk, a founding member of Pennywise who committed suicide at the age of 28 in 1996.... подробнее