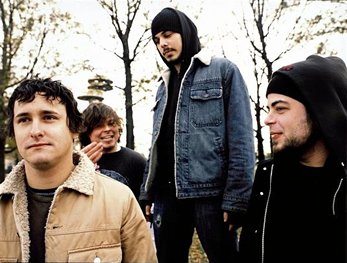 None More Black is a New Jersey-based melodic punk outfit on Fat Wreck Chords, formed by lead singer / guitarist Jason Shevchuk after the demise of his previous band, Philadelphia's Kid Dynamite. Jason left Kid Dynamite so that he could finish film school, and "to sort some things out." While at school, Jason had written some songs and would play them with his roommate Dan Gross and a drum machine. By 2000, they had a second guitarist and a real drummer. That lineup soon fell apart, but by 2001 Jason and Dan had recruited Jason's brother Jeff, along with a new drummer. After recording a 7" for Sub Division Records, that lineup fell apart, this time leaving only Jeff and Jason.... подробнее